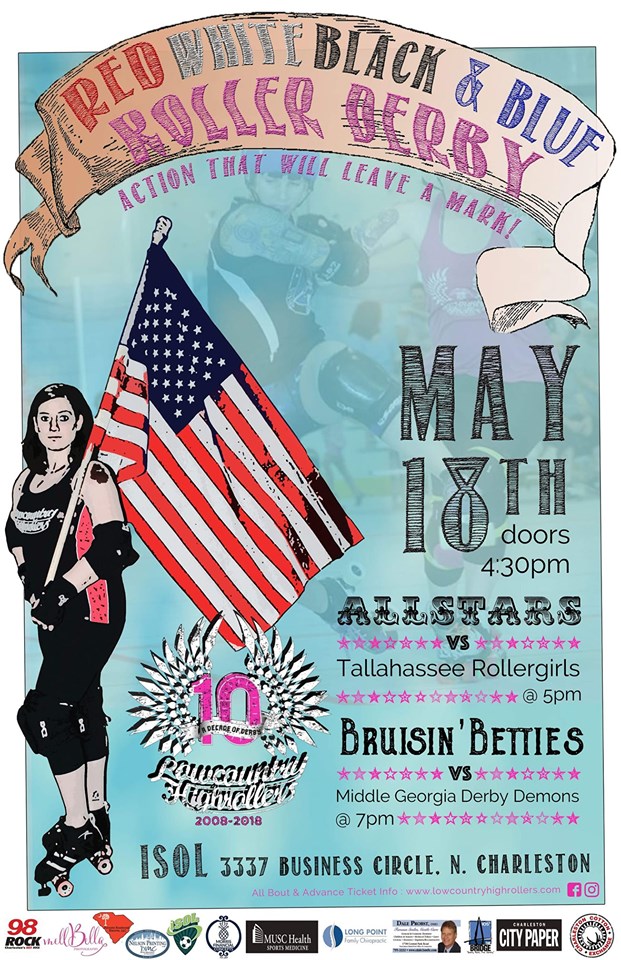 The Lowcountry Highrollers Allstars (161) will be taking on Tallahassee RollerGirls (212) from Tallahassee, Florida!

Your Bruisin’ Betties will be taking on the Middle Georgia Derby Demons from Macon, Georgia!

To celebrate the 10 year anniversary of our first bout held in 2009, our bout themes this season will pay homage to LCHR over the ages.

Beer and Wine will be available for our adult fans at the game, so please don’t forget to bring your IDs.

After the games are over, head over to the afterparty at The Mill for a meet and greet with the skaters! See who was chosen as MVPs for both sides. Enjoy drink specials, just for coming to see us!

**A note on parking: we have parking attendants walking around to make sure you are good to go! If you are unsure please ask, they are there to help!

Lowcountry Highrollers’ Allstars vs Hard Knox Roller Girls’ Allstars
Such a phenomenal bout! A little back story. Allstars played in Hard Knox RollerGirls in Knoxville in August of 2018 and managed to have a lead change in our favor in the last jam. This resulted in a victory for the Allstars!
Now, we knew HKRG was gonna be back for vengeance!
Hard Knox started off in the lead making this a stressful couple of jams! LCHR defense was strong and so was the Knoxville’s defense. As a spectator, this team seemed a bit tougher than the last time we met, despite the final score.
LCHR pulled ahead for the majority of the bout but the last few minutes HArd Knox began creeping back up which again made this extremely stressful!
In the end, LCHR proved victorious with a final of 182-144.
See Photos by Brad Morris
See photos by Flashley Photos

This was such a fun game regardless of the score. The Brawlers are such a fun and positive group of ladies! There were a few Allstars playing from both sides but the Brawlers had a few skaters who we had the honor of being their first bout against an opponent. We want to give them a huge round of applause!! The Betties defense was just so solid, often times HKRG Jammers had a hard time getting through.
Not all for nothing, Brawlers had some very squirrely jammers and some super hard hitters!
In the end, the Betties maintained the lead with a final score of 265-43.
See Photos by Flashley Photos
See Photos by Brad Morris